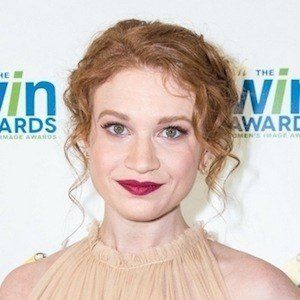 Professional ballet dancer turned actress who moved to Germany to join the Dresden based Semperoper ballet at 22 years old. Her starring role as Claire Robbins in the Starz mini-series Flesh and Bone earned her a win for Best Actress at the Satellite Awards as well as nominations from the Golden Globes and Critics' Choice Television Awards.

She was part of the Corps De Ballet in the Academy Award-winning film Black Swan. She earned a recurring role in the Showtime series I'm Dying Up Here as Tawny Lee, and was featured in an episode of the Duplass Brothers HBO anthology series Room 104.

She has a sister and an older brother, the latter being an opera singer. Both her parents were amateur dancers and psychologists.

She made her acting debut in the Mary-Kate and Ashley Olsen short You're Invited to Mary-Kate & Ashley's Ballet Party in 1997.

Sarah Hay Is A Member Of