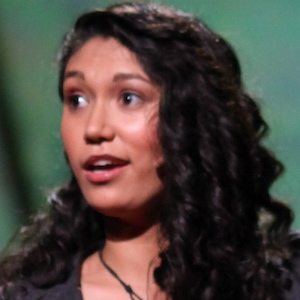 Founder and director of Project V.O.I.C.E. who is well known for her spoken word poetry. She debuted on television in 2007 when she performed the poem "Hands" on HBO's Def Poetry Jam.

She graduated from Brown University and had previously began performing spoken word poetry at the age of 14. She joined a group called Slam Team in 2006 and also competed in the National Poetry Slam in Austin, Texas as the youngest entry.

She has had poems published in Foundling Review, DamselFly Press, and decomP literary magazine. She published a short hardcover book called "B" in 2011.

She was born to a Japanese American mother and a Jewish American father. She has a brother named Philip.

She and Shane Koyczan have both competed at National Poetry Slam competitions.

Sarah Kay Is A Member Of