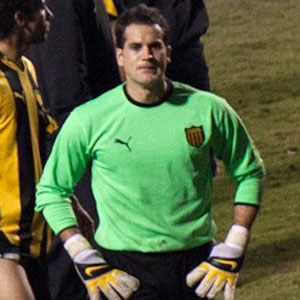 Goalkeeper from Uruguay best known as a key component on championship-winning teams like Velez Sarsfield and Penarol. He has also played for the Uruguayan national team, making his debut in 2003.

He was born in Montevideo and played youth soccer for Central Espanol from 1998 to 2000.

He was born Carlos Sebastian Sosa Silva and has a daughter named Milagros.

He and Argentina's Mauro Zarate have boh played for Velez Sarsfield.

Sebastian Sosa Is A Member Of