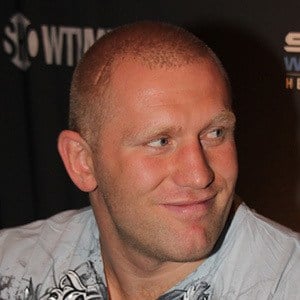 MMA heavyweight who has gained fame for his career competing in international promotions, including the US-based Strikeforce and Bellator MMA. He finished as a PRIDE 2004 Heavyweight Grand Prix semi-finalist, and was later ranked in 2015 by GLORY as the #3 heavyweight kickboxer in the world.

He served in the Russian Airborne Troops as a paratrooper. He started studying Combat Sambo at age 16 as well as boxing.

He earned a silver medal at the 2007 Russian Boxing Championship. He won a W5 World Heavyweight Championship in kickboxing.

His mother and father were both athletes, and helped him train growing up.

He defeated Alistair Overeem in the September 2007 heavyweight bout at HERO 10.

Sergei Kharitonov Is A Member Of