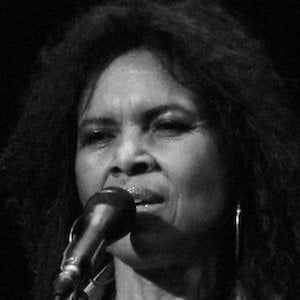 Singer and songwriter most well known for her long career working alongside Leonard Cohen. Together they collaborated on acclaimed songs like "Everybody Knows" and "Alexandra Leaving." She has also written for numerous successful artists like Diana Ross, Don Henley, and Roberta Flack.

Despite becoming a National Merit semi-finalist and earning numerous scholarships, she left Salem College to pursue a career touring with a top-40 band. Thereafter, she went on to study music at the California Institute of the Arts. Eventually, she scored her breakthrough singing backup for Leonard Cohen.

In 2008, she released her debut solo album, Everybody Knows, followed by her second, Caffeine, in 2015.

Though a born and bred native of San Francisco, she later settled in Los Angeles, California.

In 1985, she won a Grammy for penning the Patti LaBelle song "New Attitude" which appeared on the Beverly Hills Cop soundtrack.

Sharon Robinson Is A Member Of