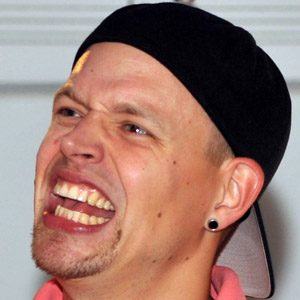 Known for his eponymous 2006 debut album and for his later album, Breaking the Rules, this Finnish-born rapper had a successful music career despite being deaf. He was the first hearing impaired person in history to sign with the Warner Music label (or with any major recording label).

He began his music career in 2004 and released his first album, Signmark, two years later.

He participated in the Swedish qualifying competition for the 2009 Eurovision Song Contest, earning just over forty-six percent of the vote for his song "Speakerbox."

Born Marko Vuoriheimo in Helsinki, Finland, he was deaf from birth and grew up communicating his music and poetry via sign language.

He and his musical contemporary, Ville Valo, were both born in Finland.

Signmark Is A Member Of