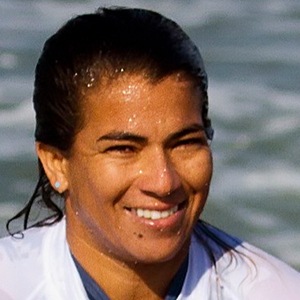 Professional surfer who is known for being a member and competitor of the World Surf League. She posts a variety of pictures and videos of her surfing to her Instagram account, which has earned over 120,000 followers.

With a passion for the sport early on, she began receiving sponsorships once she started competing. She appeared in her first ASP World Tour in 2006 where she placed 9th in her first competition. She went on to earn 3rd place the following year, and second place in 2008 and 2009.

She has won several contests in the WSL World Championship Tour including in 2009 at the Roxy Pro Gold Coast competition as well as in 2017 at the Swatch Women's Pro Trestles.

She was born and raised in Paracuru, Brazil.

Silvana Lima Is A Member Of