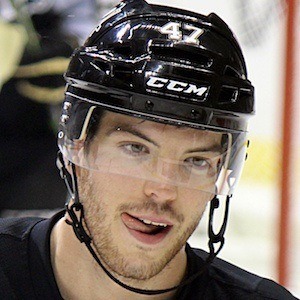 NHL defenseman who taken by the Pittsburgh Penguins with the 30th overall pick of the 2009 NHL Draft. He made his NHL debut in 2011 and was traded to the Anaheim Ducks during the 2014-2015 season.

He played his major junior hockey with the Saint John Sea Dogs from 2007-2011 before signing with Pittsburgh. He won a Memorial Cup in his last season in the QMJHL.

He was drafted by the Penguins the year after they won the Stanley Cup in 2009 then traded away a year before they won the Cup again in 2016. He won the Emilie Bouchard Trophy in 2011.

He grew up in Laval, Quebec, Canada.

Simon Despres Is A Member Of