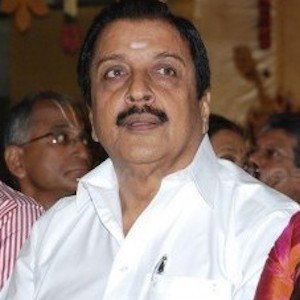 Tamil film and television actor, painter, and motivational speaker, he is famous in Tollywood and Kollywood as a leading and supporting actor. He was in films like Marupakkam and Sindhu Bhairavi, for which he won Filmfare Awards, Tamil Nadu State Film Awards, and Golden Lotus Award for Best Feature Film. He was also in the television show Chithi.

He received his first supporting role in 1965 in his debut film Kakkum Karangal. After that he became a lead actor in Kollywood in films such as Annakili, Vandichakkaram, and Sindhu Bhairavi.

He is able to write and draw with both his left and his right hand.

His full, given name is Palanichamy Gounder. He married Lakshmi and had two sons who are both actors, Surya Sivakumar and Karthik Sivakumar, and a daughter Brindha.

Sivakumar Is A Member Of