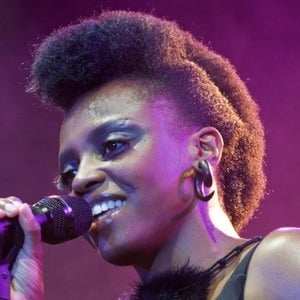 British singer who rose to fame as lead singer of the band Morcheeba. She's also released four solo albums in addition to the five she released as part of Morcheeba.

She was born Shirley Klaris Yonavieve Edwards and she decided to shorten her name to Skye by taking the first letter of each of her names and putting them together. Her first musical influences were her mother's country western records.

She's also a popular cover artist and collaborated with Marc Collin of the French group Nouvelle Vogue on Hollywood, Mon Amour -- an album of covers of popular songs from 1980s films.

She's been married to bass player Steve Gordon and they share four children. She is of Jamaican heritage and was fostered by Anglo-English parents from an early age.

Skye edwards Is A Member Of