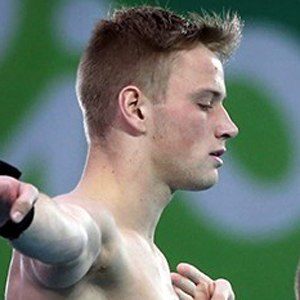 Olympic diver debuting at the 2016 games in Rio who had an exceptional collegiate career at Purdue University where he became a two-time NCAA Champion.

He first started diving when he was 7 years old. When he was 12, he hit his head on concrete during a difficult dive which almost ended his career, and possibly his life.

He studied film and video studies while at Purdue. He runs a YouTube channel on the side called TheSteeleJohnson.

He has an older brother named Race who played football for Purdue and younger sister, Hollyn. His parents are Bill and Jill Johnson. In 2016, he got engaged to Hilary Nussbaum and they married in June of 2017.

He became the first Purdue alumnus diver since David Boudia to win NCAA titles in springboard and platform in the same year.

Steele Johnson Is A Member Of