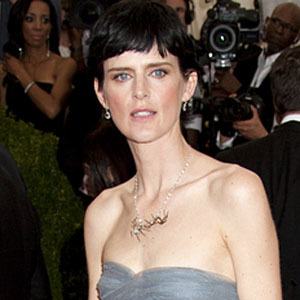 Known for her work in the runway shows of designers Karl Lagerfeld, Chanel, and Shiatzy Chen. She also appeared in print campaigns for Burberry, Hermes, and Calvin Klein.

She began modeling while she was a student at the Winchester School of Art. Early in her career, she appeared in photo spreads for Harper's Bazaar and the English, Italian, and French versions of Vogue.

She became known at the beginning of her career for her unique septum piercing.

The granddaughter of the Duke and Duchess of Devonshire, she was born in Oxnam, Scotland. Following their 1999 wedding, she and her husband, photographer David Lasnet, welcomed one son and three daughters. She died suddenly on December 22, 2020.

Stella Tennant Is A Member Of