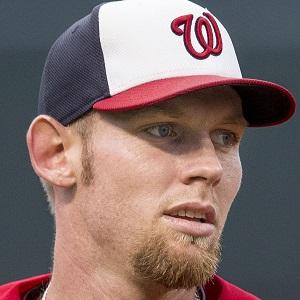 Starting pitcher who was selected first overall in the 2009 MLB Draft by the Washington Nationals. He quickly became one of the team's top pitchers and was named to his first All-Star game in 2012. He was named World Series MVP in 2019 after helping the Nationals capture the franchise's first-ever title.

He struck out 23 batters in a college game while pitching for San Diego State.

On June 8, 2010, he set the Nationals' franchise record for most strikeouts in a major league debut with 14.

He was born to Kathleen Swett and Jim Strasburg. He married Rachel Lackey in 2010.

He was joined by fellow starting pitcher Gio Gonzalez on the Nationals in 2012.

Stephen Strasburg Is A Member Of