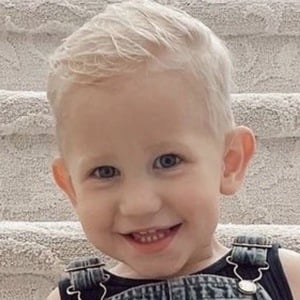 2019 addition to the popular Nelson family that found fame on the YouTube channel Not Enough Nelsons. The family channel has included skits, challenges and vlogs and has accrued over a million subscribers on YouTube.

His gender was unveiled in an April 2019 video called "BABY GENDER Reveal! SURPRISE!"

His name was introduced in an Instagram caption accompanying a picture of his mom still pregnant with him. The caption read, "Baby Ledger Welcome to the world little buddy!!!! Finishing off the "sweet sixteen." Happy Birthday!! JULY 20TH!! Guess below what time he was born!!!?"

His mother's name is Tiffany. He was the 18th member of the family. He was the 7th biological child; they adopted nine others. His siblings are Kass, Bridger, KennaDee, Beckham, PresLee Grace, DeLayNee, June, PaisLee, Luke, NayVee, SaiDee, LiLee, KassaDee, JourNee, Jaine, Trey and ElleCee.

Some siblings of his included Beckham, PaisLee and LiLee Nelson.

Ledger Nelson Is A Member Of