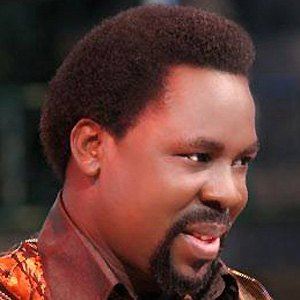 Leader of the The Synagogue, Church of All Nations who runs the group's TV station, Emmanuel TV, which broadcasts his claims of faith healing and demon-banishing.

He said in interviews that he fasted for 40 days and 40 nights and had a vision from heaven to start his ministry, which grew to over 15,000 members.

He claimed to have documented evidence of faith healing curing everything from AIDS to cancer, with patients including Africa's top sports stars.

He was born in Temitope Balogun, allegedly after 15 months in his mother's womb.

Among the prominent visitors to his SCOAN ministry was the former wife of Nelson Mandela.

TB Joshua Is A Member Of