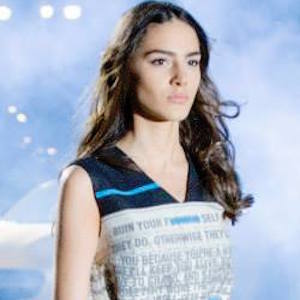 In 2015, this young Georgian model walked the runway for such major designers and fashion houses as Giorgio Armani, Elie Saab, Dolce & Gabbana, and Yohji Yamamoto. She was also the Fashion Model Directory's April 2015 Model of the Month.

She signed with the Georgian division of NEXT Model Management when she was just fourteen years old and soon thereafter joined the agency's American, French, British, and Italian rosters.

Before beginning her modeling career, she trained as a tennis player.

She was born and raised in Tbilisi, Georgia, and is the daughter of Model Look agency founder Nino Tskitishvili and the niece of Denver Nuggets NBA forward Nikoloz Tskitishvili.

She was featured in designer Donatella Versace's 2015 Versace Couture show.

Tako Natsvlishvili Is A Member Of