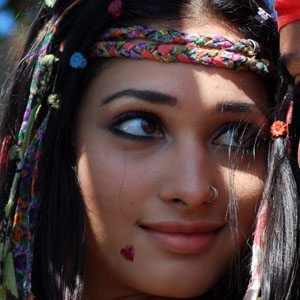 Indian actress well known for her roles in Hindi films such as Chand Sa Roshan Chehra and Tadakha, as well as Telugu and Tamil films such as Baahubali 2: The Conclusion.

She appeared in the music video for Lafzon Mein Keh Na Saku by Abhijeet Sawant, the winner of Indian Idol.

She won the CineMAA Award for Best Actress for her performance as Mahalakshmi in the 2011 Telugu film 100% Love.

Her parents are Santhosh and Rajani Bhatia. She has an older brother named Anand Bhatia.

She starred opposite actor Vijay Chandrasekhar in the 2010 Tamil film Sura.

Tamannaah Bhatia Is A Member Of