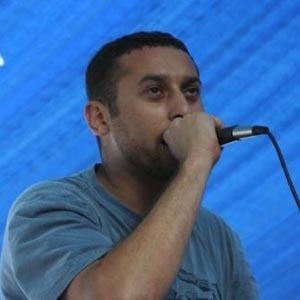 Rapper and social activist who is known for being the leader of DAM, the first Palestinian rap group. They released their first EP, "Stop Selling Drugs", in 1998. Their songs are protest driven, focusing on Israeli-Palestinian conflict, poverty, racism and women's rights.

He became introduced to hiphop when he discovered Tupac Shakur. He learnt English by translated Tupac's lyrics into Arabic.

He and his group were the subject of the 2008 documentary Slingshot Hip-Hop.

His parents are Fawzi Nafar and Nadia Awadi. His younger brother Suhell Nafar is also in DAM.

In 2016 he starred in the play Aunti Adipos - A Memorial for Shulamit at the National Theatre of Mannheim alongside Slavoj Zizek.

Tamer Nafar Is A Member Of