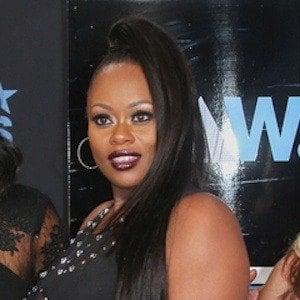 Former member of the multi-platinum album selling R&B group Xscape that disbanded in 2000, returning for a time in 2005. She is also a music producer and actress with a film credit in There's a Stranger in my House.

She and her sister trained as singers with their father at a young age.

Kandi Burruss and Tiny Cottle were part of Xscape with her.

She has a daughter named O'Shun Reney with husband Darius Byas. Her father Reverend Randolf Scott was a part of an R&B group himself called Scott Three.

She and her sister LaTocha Scott were a part of Xscape together.

Tamika Scott Is A Member Of