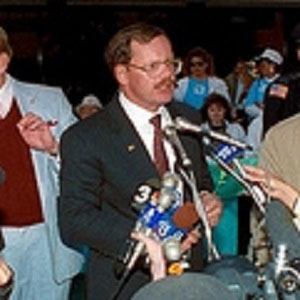 Famous as a result of the six year period he spent as a hostage of the Hezbollah Shiite militant group, this Associated Press journalist worked in politics and higher education following his 1991 release and penned a 1995 memoir titled Den of Lions.

After serving in the Vietnam War and working as a U.S. Marine Corps war reporter, he earned political science and journalism degrees from Iowa State University. Upon securing a position with the Associated Press, he became a correspondent in Lebanon.

When his days as a hostage in Lebanon ended, he returned to the United States and taught journalism at Ohio University, Columbia University, and the University of Kentucky. During this period, he also launched an unsuccessful campaign for a Democratic seat in the Ohio State Senate.

Though he was born in Ohio, he grew up primarily in Batavia, New York. His first marriage, to Mihoko Anderson, resulted in a daughter named Gabrielle; his second marriage, to Lebanese national Madeleine Bassil, produced a journalist daughter named Sulome.

Anderson and fellow journalist Charles Glass were both Middle East correspondents in the 1980s and 1990s.

Terry Anderson Is A Member Of