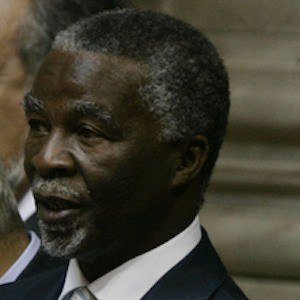 South African politician who became as the second post-apartheid President of South Africa in 1999. He resigned in 2008 after being recalled by the African National Congress's National Executive Committee. During his tenure as President South Africa's economy and middle class grew considerably.

He was elected secretary of the African Students' Association in 1961.

He has received worldwide criticism for his AIDS stance and for banning the use of antiretroviral drugs in public state hospitals.

He had a child with his wife Zanele Dlamini.

He succeeded Nelson Mandela as the President of South Africa.

Thabo Mbeki Is A Member Of