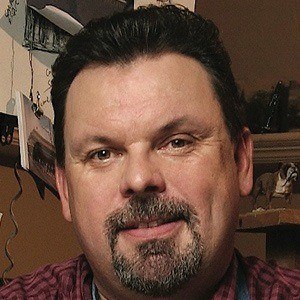 Popular artist known for his idealized, glowing scenes; nicknamed "The Painter of Light," which was originally ascribed to J.M.W. Turner. At one point, it was claimed that one out of every 20 American homes possessed a Kinkade painting.

He studied at the University of California-Berkeley and at the Art Center College of Design in Pasadena. He and James Gurney co-authored the sketching handbook, "The Artist's Guide to Sketching," which led to them being hired as background artists for 1983's animated feature, "Fire and Ice," from the Ralph Bakshi Studios.

He married Nanette Wiley in 1982, and the couple had four children: Merritt, Winsor, Everett, and Chandler. He named his daughters after famous artists.

His life was the subject of a 2008 movie, "The Christmas Cottage," starring Jared Padalecki.

Thomas Kinkade Is A Member Of