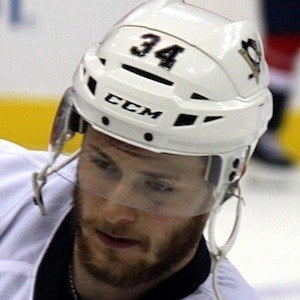 NHL defenseman who was drafted 110th overall by the Pittsburgh Penguins in 2010. He made his NHL debut six years later and helped the Penguins win the 2016 Stanley Cup.

After being drafted in 2010, he spent three years in the OHL with the Windsor Spitfires. He then spent time with the Wilkes-Barre/Scranton Penguins and the Wheeling Nailors.

Prior to playing in North America, he played in the German Development League, the 2nd Bundesliga, and the Deutsche Eishockey Liga.

He grew up in a hockey household, as both his brother and sister played the sport. His father, Erich, is an IIHF Hall of Famer.

He and Brian Dumoulin both won the Stanley Cup with Pittsburgh in 2016.

Tom Kuhnhackl Is A Member Of