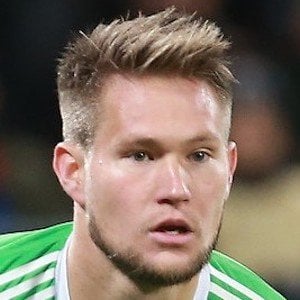 Goalkeeper who has gained fame for his international club career, including for the Swiss Super League club Basel from 2014-2018. He helped lead the club to three consecutive Swiss Super League titles from 2015-2017 before signing with La Liga side Sevilla in July 2018.

He played his youth soccer in Czech club Vítkovice's youth academy. He made his professional debut with the club's senior side in 2007.

He was named to the team of the tournament at the 2011 UEFA European U-21 Football Championships as the goalie for the U-21 Czech side. He later earned his first cap for the Czech senior national team in 2012.

He was originally born and raised in Ostrava, Czech Republic.

He and Sergi Gómez have played as teammates for Spain's La Liga side Sevilla.

Tomáš Vaclík Is A Member Of