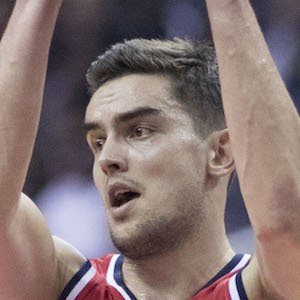 Point guard who is famous for his international club career, including in the NBA. He signed with the Washington Wizards to contribute as a back-up point guard to John Wall in July 2016.

He began his professional basketball career in 2007 when he signed with Czech club USK Praha. He was initially drafted in the 2012 NBA Draft in the second round by the Washington Wizards.

He played for the Czech senior national team at point guard during the 2015 EuroBasket tournament. He helped lead FC Barcelona to a Spanish SuperCup victory in 2015.

He was born and raised in Prague, Czech Republic.

He has contributed to the Washington Wizards' guard position alongside Jodie Meeks and Bradley Beal.

Tomas Satoransky Is A Member Of