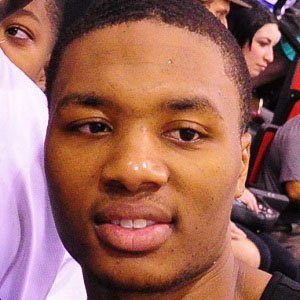 6th overall pick of the 2012 NBA Draft by the Portland Trail Blazers who was named 2013 NBA Rookie of the Year. He hit a buzzer beater three pointer in Game 6 of the first round of the 2014 NBA Playoffs to lead the Blazers to a series victory over the Houston Rockets.

He spent four seasons with Weber State, scoring over 24 points per game during his senior season.

He was born to Gina and Houston Lillard. He welcomed his first son, Damian Jr., in March 2018. In January 2021, he and his fiancee Kay'La welcomed twins, a son named Kalii Laheem and a daughter named Kali Emma Lee.

He played alongside LaMarcus Aldridge on the Trail Blazers from 2012 to 2015.

Damian Lillard Is A Member Of