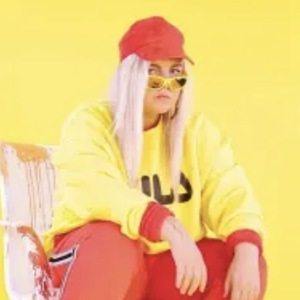 She first started learning to play the keyboard and drum pad in high school. She then started busking on the streets of Melbourne and Byron Bay in 2018 until she won the Battle of the Buskers at Buskers By the Creek in 2018. She then went on to release her first single "Johnny Run Away" in March of 2019.

She is also known for having made a guest appearance on the children's television series Toasted TV where she performed her song "Dance Monkey".

She was born and raised in Mornington Peninsula, Australia and shared a photo with her cousin Cobey to her Instagram in January of 2014.

Lij Gilmour is a fellow Australian pop singer who is also known for having appeared and performed as a guest on Toasted TV.

Tones and I Popularity 18

Tones and I Is A Member Of

Tones and I Fans Also Viewed