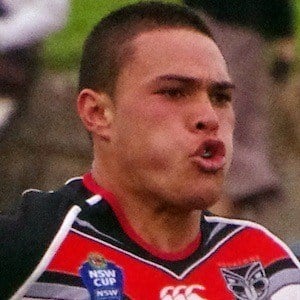 Rugby footballer who is famous for his career in New Zealand's National Rugby League. He played for the New Zealand Warriors for the 2014-2016 Auckland Nines before signing with Wests Tigers in May 2017.

He signed with the New Zealand Warriors to compete in their youth program in 2013. He subsequently won the 2013 NYC Young Player of the Year.

He has represented both Tonga and New Zealand in international rugby tournaments. He was selected to the final New Zealand Kiwis' national team's tour of Great Britain in 2015.

He is of Tongan descent.

He played alongside Adam Blair for the New Zealand Kiwis during their tour of Great Britain in 2015.

Tuimoala Lolohea Is A Member Of