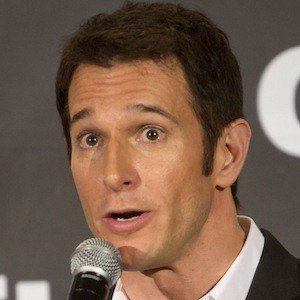 Television host and actor who is perhaps most famous for hosting the first season of The Bachelor Canada as well as Junkyard Wars and Miss America: Countdown to the Crown. As an actor, he is known for his roles in films like Half Magic (2017) and on series like Honey, I Shrunk the Kids: The TV Show.

He was raised in Calgary, Alberta, Canada. Prior to his hosting career, he was a radio DJ with the Red Deer station.

He won an Emmy for his work on Junkyard Wars.

He was previously married to fellow television host Genevieve Gorder, with whom he has a daughter named Bebelle. He has since dated actress Heather Graham.

He hosted the season of The Bachelor on which Brad Smith was the titular bachelor.

Tyler Harcott Is A Member Of