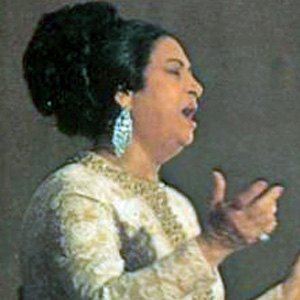 Egyptian singer, songwriter, and actress who is regarded as one of the greatest Arabic female singers of all time.

Her singing career began in the mid 1920s when she began holding private concerts.

She was known as the Star of the East and in 2001, the Egyptian government opened a museum under that name in tribute to her.

Her father disguised her as a young boy when she was twelve and entered her into a performing troupe that he directed.

She was an extremely influential singer during the same period as the great Edith Piaf.

Umm Kulthum Is A Member Of