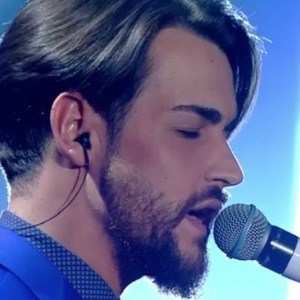 Italian pop singer who is known for appearing on the eighth season of the talent show Amici di Marie de Filippi where he placed second. He is also known for his hit singles "Amami" which was released in 2012 and for "Indissolubile" in 2010.

He competed in his first competition in 2000 at Canzoni Sotto I'albero. He then won first prize in the Bravo Bravissimo program. In 2008, he earned national attention by competing in Amici di Marie de Filippi. His debut EP came in April of 2009 and his debut album came that same year.

He has won several different awards for his music and performing including several Wind Music Awards in 2010 and several TRL Awards including Best Video for "Per Tutte Le Volte Che" in 2010 as well.

He was born and raised in La Maddalena, Sardinia, Italy.

In July of 2009, he released a cover version of the song "Listen" by Beyoncé which earned him a Gold Record in sales.

Valerio Scanu Is A Member Of