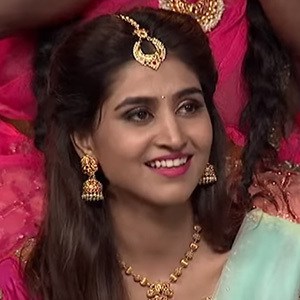 Indian actress and model who primarily appears in Telugu films. She's known for her appearances in the Telugu films Lovers, Best Actors, Kai Raja Kai and Sri Rama Raksha as well as her performance in the web series Pelli Gola pruduced by Annapurna Studios.

She holds a B.A. in Electronics.

She made her acting debut in 2014 in the award-winning Telugu anthology film Chandamama Kathalu.

She is the second daughter and youngest child of a Tamily family from Hyderabad.

Varshini Sounderajan Is A Member Of