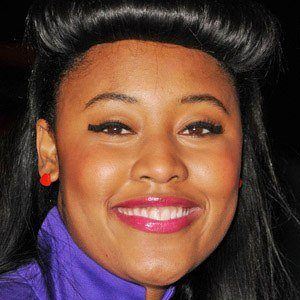 Most Popular#57547
Born in Northampton, England#16

Born Vanessa Brown and better known by her stage name of V V Brown, this English indie vocalist and songwriter released such albums as Travelling Like the Light and Samson & Delilah. The former recording reached #30 on United Kingdom music charts and was a certified gold album in France.

She began trumpet lessons in her late childhood years and went on to perform with several jazz bands. Although she was accepted to several top English law schools, she chose to pursue a music career instead.

A fashion model as well as a musician, she took part in London Fashion Week and was featured in a Vogue magazine spread.

She and her five younger siblings grew up in Northampton, England, as the children of a Puerto Rican father and a Jamaican mother.

Her hit song "Shark in the Water" was featured in a 2009 episode of America Ferrera's popular television series, Ugly Betty.

Most Popular#57547
Born in Northampton, England#16

V V Brown Is A Member Of