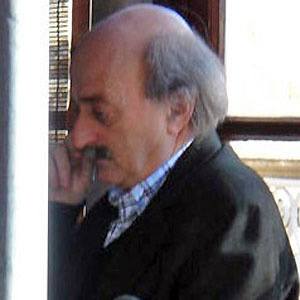 Lebanese socialist politician who is leader of Lebanon's Druze community. He has wavered between supporting Syria and Damascus control.

He was a reporter for An Nahar after graduating from the American University of Beirut.

He was labeled by the BBC as one of the smartest leaders in the Druze clan.

After two marriages, he married his third wife Nora Sharabati. He has three children: Taymour, Aslan, and Dallia.

He had strong relations with Syria until the presidency of Bashar Al-Assad.

Walid Jumblatt Is A Member Of