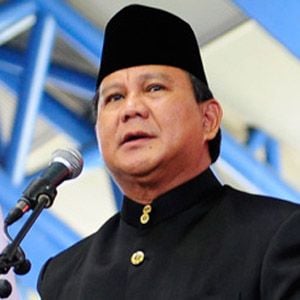 Affiliated with the Great Indonesia Movement Party, this business executive and Indonesian Armed Forces lieutenant general ran unsuccessfully for the Indonesian presidency in 2014. He had previously (in 2009) run for vice president on the Megawati Sukarnoputri ticket.

After attending the Indonesian Military Academy in Magelang, he began his service with the Kopassus, a special operations unit of the Indonesian National Army.

He was widely criticized for his role in the Spring, 1998 Indonesian riots: under his command, Indonesian troops kidnapped activists and subjected them to torture.

His father, Sumitro Djojohadikusumo, was a prominent Indonesian economist. Subianto's marriage to Siti Hediati Suharto, the daughter of a former Indonesian president, resulted in one son.

Prabowo Subianto Is A Member Of