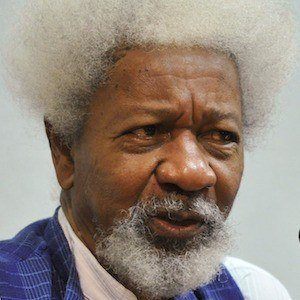 The first African to win the Nobel Prize for Literature, he wrote A Dance of The Forests and the poetry collection The Ballad of the Landlord.

He won several prizes for his writing while at Abẹokuta Grammar School and studied at University College in Ibadan from 1952-54.

He was imprisoned for 22 months during a civil war in Nigeria and wrote a significant amount of material criticizing the Nigerian government during that time.

His father Samuel was an Anglican minister. He married Folake Doherty-Soyinka in 1989 and he has five children.

He dedicated his Nobel Prize to South African freedom-fighter Nelson Mandela in his acceptance speech in 1986.

Wole Soyinka Is A Member Of