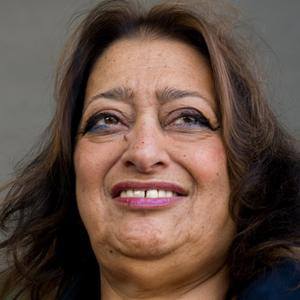 The first woman and first Muslim to receive the Pritzker Prize in architecture in 2004. She was also awarded the Stirling Prize in 2010 and 2011. She was known for her futuristic designs and use of curving formations with fragmented geometry and numerous points of perspective.

She studied mathematics at the American University of Beirut before enrolling in the Architectural Association School of Architecture in London, where she became acquainted with such future notables as Rem Koolhaas, Elia Zenghelis, and Bernard Tschumi.

She had a successful teaching career as well, serving at the Harvard Graduate School of Design, the University of Illinois at Chicago's School of Architecture, the Hochschule für bildende Künste Hamburg, and various other institutions. In 2002, she came in first in the international design competition for Singapore's one-north master plan.

She grew up in Baghdad, the daughter of a wealthy industrialist and politician; her family was Sunni Muslim Arab.

She carried on the Modernist architectural approach first pioneered by Frank Lloyd Wright.

Zaha Hadid Is A Member Of