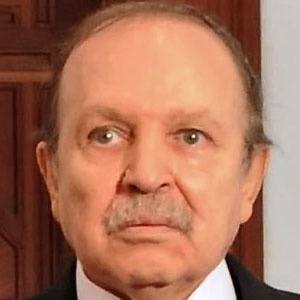 Algerian president who presided over the end of the country's bloody civil war and quelled civil unrest. He first took office in 1999 and in 2012 he became the longest-serving President of Algeria.

He was in the government of a previous president but was forced out after a political power shift.

One of his first acts as president was to make peace with the anti-government guerrilla fighters, offering them amnesty.

He was born into a large family: four brothers and three half-sisters. He married Amal Triki in 1990; but they later divorced.

His country has produced many notable people, including the iconic fashion designer Yves Saint Laurent.

Abdelaziz Bouteflika Is A Member Of