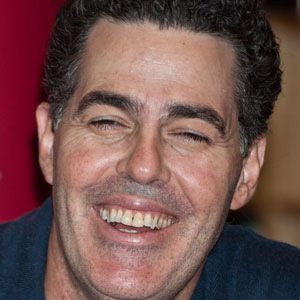 Well-known humorist and radio personality who has starred on MTV's Loveline and The Man Show. He also provided the voice of Officer Wynchell in the animated Disney film Wreck-It Ralph.

He has worked as a carpet cleaner, boxing coach, carpenter and a traffic school teacher.

He helped create and performed on the show Crank Yankers.

He got married to Lynette Paradise on September 28, 2002 and had two children together.

He was once on Donald Trump's show The Celebrity Apprentice.

Adam Carolla Is A Member Of