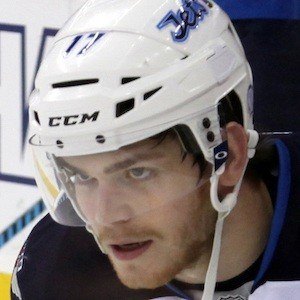 NHL center who was a third round pick of the Winnipeg Jets in 2011. He established himself as a physical presence after first being called up in 2014, amassing almost 450 hits in his first two NHL seasons.

He played four years with the Swift Current Broncos of the Western Hockey League before officially joining the Jets organization. He then spent parts of two seasons in the American Hockey League.

In his first year in the WHL, at 16 years old, he won the Daryl K. Seaman Trophy for his academic as well as athletic achievements.

His father, Dave, is a retired hockey player who appeared in more than 1,000 NHL games in his career. He has an older brother, Joel, who was selected by the LA Kings in the same draft, but decided to attend Cornell before going pro.

He and Dustin Byfuglien were the top two hitters on Winnipeg in the 2015-2016 season.

Adam Lowry Is A Member Of