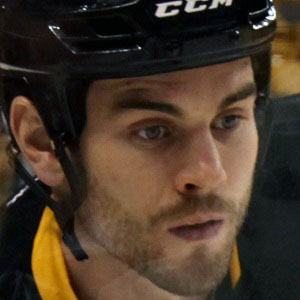 NHL defenseman who won a Stanley Cup Championship with the Boston Bruins in 2011.

Drafted by the junior Ontario Hockey League in 2003, he spent four seasons with the Sudbury Wolves, before being drafted by the Boston Bruins.

He moved up the team's ranks during the 2013 NHL Playoffs with the Bruins, as he was assigned to slow down the opponents' top forwards.

He was born in Charlottetown, Prince Edward, Earl of Wessex Island.

Milan Lucic was his teammate and the Bruins' left winger during their 2011 Stanley Cup Championship season.

Adam McQuaid Is A Member Of