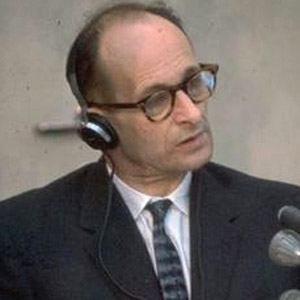 A lieutenant colonel of the Nazi regime and a key organizer of the Holocaust.

He joined an Austrian branch of the Nazi party in 1932 and transferred to the Nazi secret service sector in 1934.

He was captured in Argentina by Mossad operatives in 1962 and was taken to Israel, where he was found guilty of crimes against humanity, and hanged on May 31, 1962.

He was the son of Maria and Adolf Karl Eichmann.

He was an associate of Adolf Hitler in Nazi Germany.

Adolf Eichmann Is A Member Of