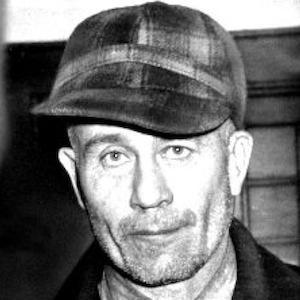 Infamous Wisconsin murderer and necrophile who was sentenced to life in a mental hospital in 1968 for his bizarre crimes.

He was a devout Christian who held a great fear of his domineering mother.

His crimes also included grave robbing and creating a woman suit of stitched together body parts, thus allowing him to feel like his mother.

Had an older brother named Henry who died in a fire, along with their father, and it is believed Ed started it.

He was partly the inspiration for the killer Buffalo Bob in the 1991 thriller Silence of the Lambs, directed by Jonathan Demme.

Ed Gein Is A Member Of