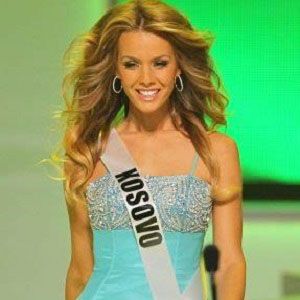 Famous for being crowned Miss Universe Kosovo 2011 and for competing for Kosovo in that year's Miss Universe pageant, she is also known for her career as a recording artist; she released her debut single, "Nese Je Burre," in 2009.

She began her modeling career in her late teens, following a chance meeting with a fashion photographer.

Her 6'0" height became an asset to her modeling career.

She spent the first twelve years of her life in Montenegro and the remainder of her youth in Michigan, U.S.A. She was once engaged to Albanian pop singer Shpat Kasapi.

She made it to the top 16 in the 2011 Miss Universe pageant, but ultimately lost the competition to that year's winner, Leila Lopes of Angola.