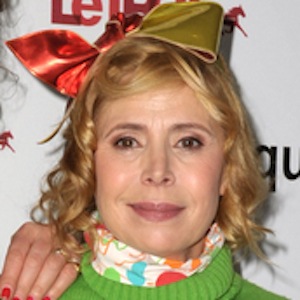 Spanish noble and fashion designer who became a figurehead in the Spanish artistic scene in the 1980s, when she was an avid promoter of the 'Movida Madrileña' cultural revolution. She is the 12th marchioness of Castelldosríus, Grandee of Spain and the 29th baroness of Santa Pau.

She studied at the School of Fashion Arts and Techniques in Barcelona. At age 20, she worked as an intern at designer Pepe Rubio's studio - a year later, in 1981, she presented her first collection in Madrid at the LOCAL design centre. Shortly afterwards, she exhibited one of her collections at the Museum of Contemporary Art of Madrid.

Although having started with a women's collection, she licensed her brand name in 1991, expanding her line to men and children fashion, toys, shoes, home-goods, make-up and more. She was the first European designer to be a part of the international fashion collection of Absolut.

She was with journalist Pedro J. Ramirez from 1986 to 2017. Together they have two children, Cosima and Tristán, named for Tristan Tzara.

Mark Rothko and Andy Warhol are huge influence on her designs.

Agatha Ruiz de la Prada Is A Member Of