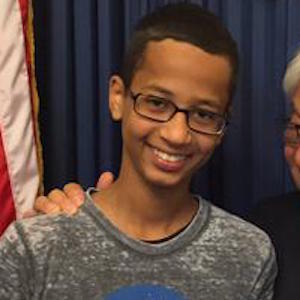 Social media sensation who rose to fame at fourteen after he was arrested for bringing a homemade clock to school. He was reported by a teacher who allegedly thought the clock looked like a bomb. News of the arrest went viral, prompting racial profiling allegations, protests, and national media coverage.

He was known by his high school teachers as an electronics enthusiast. He also gained a reputation for building a remote to make the school projectors malfunction on command.

He has been invited to events by numerous prestigious science agencies and companies like Google and NASA since his arrest went viral.

His father, Mohamed Elhassan Mohamed, is the one who encouraged his son to show his clock to his teachers.

Since his arrest, he received support from President Barack Obama, Hillary Clinton, and Mark Zuckerberg.

Ahmed Mohamed Is A Member Of