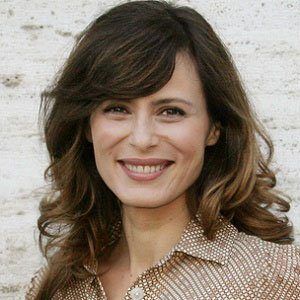 Initially famous for her role as Victoria Aragon in the 1995 feature A Walk in the Clouds, she is also known internationally for her performances in Boca a Boca (1996) and The Machinist (2004).

Early in her career, she acted in several episodes of the Spanish television series Segunda Ensenanza.

She was cast as Anna Amitrano in the 2003 movie I'm Not Scared.

Born Aitana Sánchez-Gijón de Angelis to university professor parents, she spent her earliest days in Rome, Italy, and the remainder of her childhood in Spain. With her husband, Guillermo Papim Luccadane, she raised children named Teo and Bruna.

She and Olivier Martinez co-star in the 1997 film The Chambermaid on the Titanic.

Aitana Sánchez-Gijón Is A Member Of