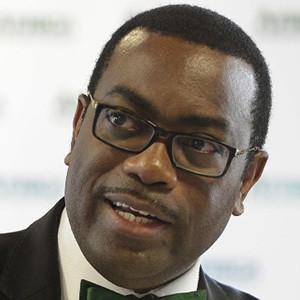 Nigerian politician who is known for having served as both the 8th President of the African Development Bank as well as the Nigerian Agriculture Minister. He is also known for his association with the Alliance for a Green Revolution in Africa.

He attended Purdue University where he obtained his PhD in Agricultural Economics and also founded the African Student Fellowship group. He started serving as a senior economist at the West African Rice Development Association before he became the Minister of Agriculture in 2010.

He is known for having received several honors including the Grand Officer of the National Order of Merit of Tunisia in 2019 and the Grand Cordon of the Order of the Star of Africa of Liberia.

He met his wife Grace while attending Purdue University. Together they have two children named Rotimi and Segun.

He was appointed by United Nations Secretary general Ban Ki-Moon to serve as a member of the Lead Group of the Scaling Up Nutrition Movement.

Akinwumi Adesina Is A Member Of