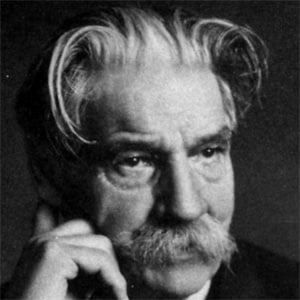 Doctor who founded the humanitarian Albert Schweitzer Hospital Lambarene, West Africa. In 1952, he won the Nobel Peace Prize for his "Reverence for Life" philosophy.

He learned how to play music from his father.

His philosophy of reverence for life led him to spend his life trying to help others.

He married Helene Bresslau in 1912, and together they had a daughter named Rhena.

He was heavily influenced by the works of German composer Johann Sebastian Bach.

Albert Schweitzer Is A Member Of