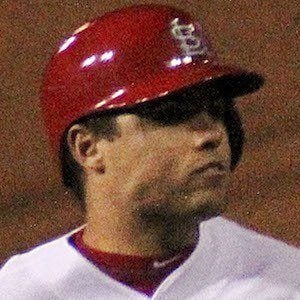 Shortstop who was an All-Star selection in his rookie season with the St. Louis Cardinals in 2016. The Cardinals initially signed him as a free agent in 2014.

Before the Cardinals scooped him up, he played for the Naranjas de Villa Clara in the Cuban National Series for more than five years.

He played ball in Mexico City for a year and a half while waiting to be eligible for the majors after defecting from Cuba in 2012.

He was born in Santa Clara, Villa Clara, Cuba. He left his parents and girlfriend behind in order to continue to pursue his career. He reunited with his father Rigoberto in Mexico.

He grew up on the same street in Cuba, and played for the same youth baseball team as Miami Marlins ace Jose Fernandez. Diaz hit a home run in his first ever professional at-bat against Fernandez.

Aledmys Díaz Is A Member Of